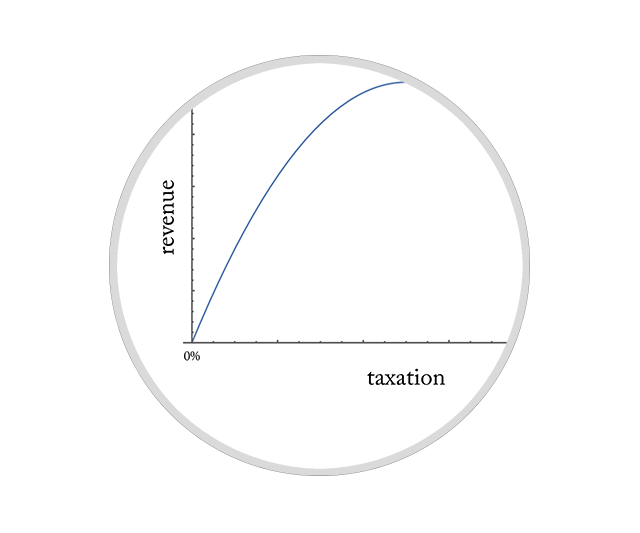 One of the reasons has special appeal because it promises a free lunch.

There are many reasons to want tax cuts. One of the reasons has special appeal because it promises a free lunch. When taxes are cut it seems clear that the government will have less income and can no longer afford to spend money on all the things it used to spend money on. A tax cut then leads to an uncomfortable discussion about which of the government’s expenses can no longer be afforded and need to be cut. The argument I am talking about says that this conclusion is wrong. You can cut taxes while maintaining the tax revenue. The argument is centered on the Laffer curve and it goes like this.

Imagine the two extremes of no taxation and of total taxation. In the case of no taxation the government will have zero revenue because nobody pays any taxes. The same is true in the case where everything is paid to the government. There is no incentive to do anything if you can not keep any of the proceeds. If you were to plot the government’s income as a function of the level of taxation you have a positive function that is zero at the two extremes of zero percent taxation and of hundred percent taxation. Assuming that you are dealing with a continuous function you now have the following fact: Every line parallel to the x-axis, i.e. every level of government income, intersects the curve at least twice. This means that there are always at least two levels of taxation that give rise to the same government income. Two not one.

The argument for lower taxation is then that the current level of taxation is the higher of the (at least) two levels of taxation. So the message of the curve is that you can lower the tax rate and not pay any price for it. You can built the same roads and bridges, maintain the same size military, and all of that with more money in everybodies pockets.

The argument works because it takes into account the effect the level of taxation has on economic activity. It is this negative feedback between taxes and output that is central to the Laffer curve. It is the best kind of argument. It is extremely simple, yet, has wide ranging consequences. One might wonder, do Laffer like arguments exist in other areas of politics? Let’s see.

As a first example we look at health care. The basic argument is an argument about freedom. Here is Barry Goldwater in Conscience of a Conservative:

Let us then start to make a Laffer like argument. One of the extremes is simple. If we have total government control we will have very little freedom. Following Goldwater, the remedy is clear. Reduce government regulations and gain freedom in the process. This is much like in the case of taxation. The higher the taxation the more government income. Here we have, the higher the regulation, the fewer the freedoms.

To complete the argument we now have to ask: Did we neglect an important feedback? Did we forget an effect that destroys the linear relation between regulation and freedom?

Freedom becomes an abstract notion if your body has become a prison.

In the case of health care this feedback indeed exists and it is an important one. Imagine there is no government regulation. This is a case where large parts of the population will not have access to health insurance or to proper medical care. Such lack of access to medical care will have an immediate, and negative, effect on personal freedoms. To illustrate why that is, take the example of Caroline Payne[1]. She works at Wal-Mart, making minimum wage. Although she has a college degree she can not get ahead because she misses one crucially important piece. She has no teeth. She is stuck in low paying jobs without health care because higher paying jobs require her to interact with customers and companies don’t want her to represent them. If she had medical insurance she could get her teeth fixed and have a career that is closer to her abilities. If she had health insurance, she could actually experience the freedom that she is supposed to enjoy.

What is true for missing teeth is also true for numerous other medical problems that can hold a person back. Freedom becomes an abstract notion if your body has become a prison.

This effect changes the shape of the health care Laffer curve. Instead of decreasing, the curve actually increases when government regulations are added. 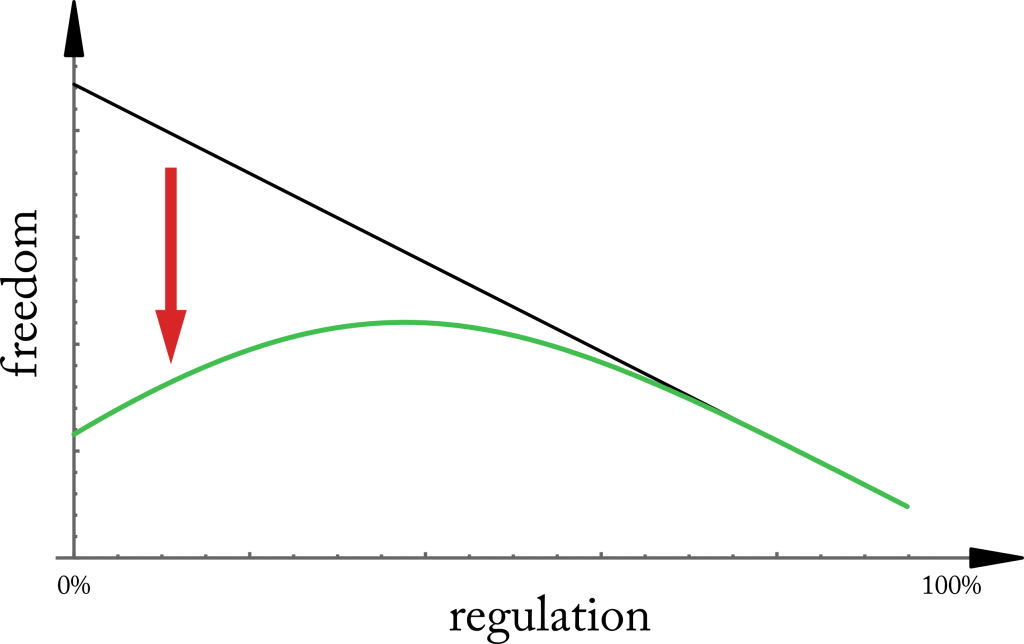 This type of reasoning can be repeated for gun control measures. Again, this is an argument about freedom. By restricting the right to own a weapon, gun legislation is seen as a restriction of your freedoms. The simple remedy is again the same. Remove regulations and gain freedoms.

As in the case of health care, though, there is a feedback that needs to be taken into account. If there are no regulations, it is your most basic freedom to live that might be severely imperiled. If anyone has the freedom to acquire any type of gun you might pay for that freedom with your life. In today’s America, that is the case for over 30.000 victims of gun violence each year. This number is an order of magnitude higher than in other developed nations, yet, the current political momentum is to further increase the freedoms of gun owners. Recently regulations have been rescinded that prevented mentally ill people to acquire weapons and a law is making its way through congress that will allow the use of silencers.

Sometimes, simple relations are just too simple to be true. The original Laffer curve deals with taxation but the thinking behind the curve can be applied much more broadly. Health care and gun control are just two concrete example. So, go ahead, use Laffer’s argument but don’t do it selectively. Laffer type feedback is what makes many political challenges so thorny and compromise so essential. Insist on simple dependencies and you might destroy the very thing you want to achieve.